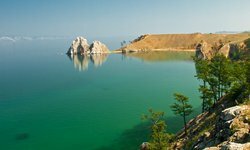 Trans-Mongolian Railway Tour from Moscow to Beijing in 13 days

Crossing 5 time zones, starts in Moscow and travels through Ural, Siberia, Baikal lake, Mongolia, Gobi desert, China and Beijing.Your individual programme might be provided as Taylor Made Tour with dates and services convenient for you only. 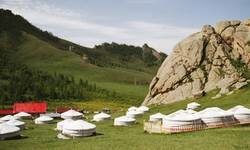 Crossing 5 time zones,starts in Beijing and follows to Mongolian Gobi Desert,Terelj National Park,Ulaan Baatar city,then entry to Russia to have a stop on Baikal lake,continues on Trans-Siberian Railway and finishes in Moscow,the Capital of Russia.

Short tour from Moscow to St.Petersburg gives you an opportunity to know a lot about Russia in few days. Red Sguare, The Moscow Kremlin and Cathedrals, russian food and moscow streets. St.Petersburg – is a unique treasure house of 18th century architecture and the city that best displays the Russian genius for museums. The Peter&Paul Fortress, The Summer Palace of Petrodvorets, the Palace Square, Isaac's cathedral. The Trans-Mongolian railway tour from St Petersburg via Moscow and Irkutsk.Opportunity to see and feel all Russia and Mongolia. Accomodation in best places. 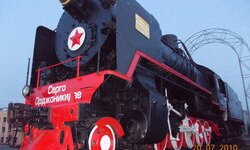 The Great Trans-Siberian journey from Moscow to Pacific Ocean

You are on the threshold of the world's largest landmass,biggest country and longest railway.
This is the ultimate rail journey.Almost 10000 kilometres of discovery aboard the train across 7 time zones.This is the rail journey thats spans the world,linking diverse peoples and cultures of Russia. Baikal dog-sledding trips are an unforgettable experience in which you are driving your own dogsled powered by a team of our friendly, handsome Kamchatka Huskies. These dogs absolutely live to pull. The pulling instinct is so strong that they need training nearly every day. The dog-sledding base and starting point is located in Listvyanka village which is on the shore of Baikal and 70km away from Irkutsk city. The base has 40 dogs and is run by a family who race the dogs. They live in a wooden hut on the territory of the base. Now it's not necessary to spend huge money to buying flight or cruise to Chukotka, not necessary to get KGB permission and have all other troubles.
You should just arrive Moscow and have one day tour to Round Lake (Krugloye Lake). 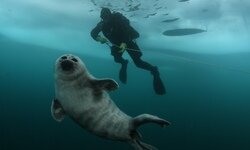 Water temperature is 0.5-1C. Visibility highly depends on snow on the ice. If there is no snow when from depth of 40 meters you can see cars and people on ice. If you look at the ice from the top, ice looks black, due to the depth. You can see divers through ice. Beginning in the middle of March visibility drops down to 10 meters. Depths vary from 3 to 30 meters. Dive tie is 45 minutes. There can be one or two dives a day depending on weather conditions. Advised equipment includes dry suit, dry gloves, and two winter regulators. A 1000km-long peninsula separated from the mainland by the Sea of Okhotsk, Kamchatka is hyperactively volcanic. It seems that the Creation hasn’t quite finished yet. The region can claim 200 volcanoes in varying stages of activity, some long extinct, grassed over with aquamarine crater lakes, while 20 or more rank among the world’s most volatile.
We can do not only the general sightseeing, we can cater to your more specific needs. To the norhteast of Moscow are a number of ancient towns and cities from which the mighty Russian state was born.The region is known as Russia's Golden Ring as it brought Moscow its great wealth.Most of the Golden Ring towns were founded in the 11th century and rapidly grew into political,religious and commercial centres following the transfer to Vladimir in 1169 of the capital of Kievan Rus,which was the first feudal state in Eastern Europe.